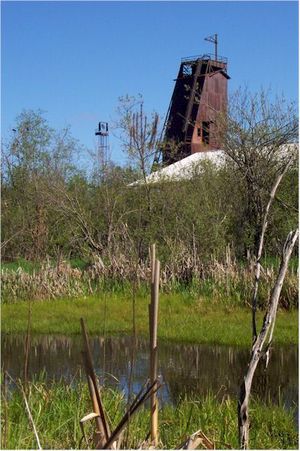 "Yellow boy" is the common name for the yellowish-orange precipitate that results from acid mine drainage.  Much like sediment, yellow boy covers the stream bottom and diminishes fish and aquatic insect habitat.  However, unlike sediment, yellow boy clings to objects it comes into contact with, including submerged logs, rocks, fish gills, or even aquatic insects.  Consequently, yellow boy is often much more detrimental and displays its effects in a considerably shorter amount of time.  The acidic conditions that lead to yellow boy also change the water quality making it difficult for the animals that inhabit the stream to survive and prosper.
Iron County was built on the mining of iron and the Iron River watershed has absorbed the impact of these ore operations over the course of the 20th century.  Although mines in Iron County have all closed, the evidence of their presence is still noticeable today.  While the old mine buildings and equipment provide historical value for the community, the waste rock piles and flooded mine shafts still pose some threat to the local environment.  Waste rock piles can be found throughout the watershed, with some of the most potentially harmful occurring along the river in a corridor that extends from Garnett Street in Iron River to Brady Avenue in Caspian.

Below: Treatment systems at the Buck Mine and Dober Mine locations allow for the precipitation and settling of yellow boy before it enters the river, leading to vast water quality improvements in the Iron River. 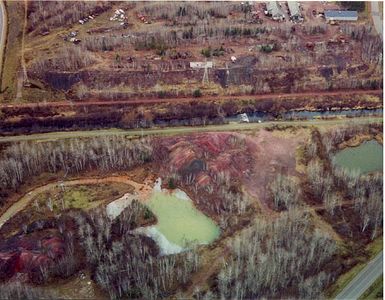 Pyritic iron ore (sulfur-containing iron), in contact with the air and water oxidizes to create sulfuric acid which reacts with the ore to result in an acidic iron solution.  After further oxidization and the neutralization of the solutions in water, the iron falls out of solution, forming “yellow-boy”.
Eventually the surfaces of the waste rock piles lose their ability to produce acid mine runoff.  The biggest problem in dealing with eliminating the waste rock piles is the fact that in disturbing the waste rock, new rock with the capacity to produce more acid and yellow boy is exposed, aggravating the situation once again.  The nature of the rock along with the vast extent of its presence in the watershed poses serious problems relating to the cost of removal and disposal.

Photo to the left:
Treatment systems at the Buck Mine and Dober Mine locations allow for the precipitation and settling of yellow boy before it enters the river, leading to vast water quality improvements in the Iron River. 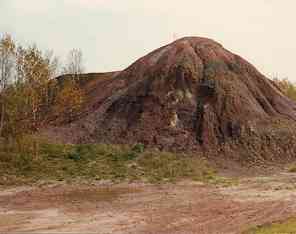 A typical waste rock pile found along the Iron River.
In the past, work has been done at two locations that were known to have a serious detrimental effect on the river.  Implementation of a series of treatment ponds and wetlands at both the Dober Mine and Buck Mine locations enabled the participation and settling of yellow boy before entering the river.  These systems made a positive impact, but the study and maintenance of these ponds and wetlands are required to determine if they have reached their carrying capacity.  The need to address the lifespan of these treatment systems and the extensive number of other untreated areas support the high priority of resolving acid mine drainage problems.